The remuneration report describes the principles of the remuneration system for the members of the Management Board and Supervisory Board of Deutsche Wohnen SE and explains the structure and amount of individual remuneration for the board members.


1.1. Remuneration system for the Management Board

The system of remuneration for the Management Board and total remuneration for individual Management Board members is defined by the Supervisory Board and reviewed at regular intervals. Remuneration is governed by the German Stock Corporation Act [Aktiengesetz – AktG] and the provisions of the German Corporate Governance Code [Deutscher Corporate Governance Kodex – DCGK] applicable in financial year 2019 as amended on 7 February 2017.

All Management Board contracts provide for a compensation payment if the contract is terminated early without an important reason. It is capped at a maximum of two annual salaries (settlement cap), but covers no more than the remaining term of the employment contract. Contracts also provide for a compensation payment in the event of a change of control, capped at a maximum of three annual salaries in accordance with 4.2.3 of the DCGK 2017.

Furthermore, Management Board members receive in-kind benefits in the form of insurance premiums, the private use of communication devices and company cars. In the event of extraordinary developments the contracts also allow the Supervisory Board to approve a special bonus. No retirement benefits have been agreed.

The remuneration system is based on parameters reflecting personal and company performance and the relative performance of the company share. Variable remuneration is largely calculated on a long-term assessment base. Share ownership guidelines (SOG) further strengthen the focus on the capital market and the alignment of shareholders’ interests with those of the Management Board of Deutsche Wohnen. The variable remuneration system for the Management Board as described below corresponds to the provisions of the German Stock Corporation Act [Aktiengesetz – AktG] and follows the recommendations and suggestions of the DCGK 2017.

Performance against the financial and non-financial targets is measured after the close of each financial year. The amount of the final annual bonus payment is capped at 125% of the target.

For the financial year 2019 the financial performance targets were (i) adjusted EBITDA without disposals (40% weighting), (ii) cost ratio (staff, general and administration expenses divided by contracted rental income; 10% weighting) and (iii) sales proceeds (30% weighting). The non-financial performance targets are strategic targets with a total 20% weighting, which cover the integration of homes acquired, the definition of a platform and portfolio strategy for the Nursing and Assisted Living business field, the implementation of the strategic sustainability programme and a more intensive dialogue with tenants and policymakers.

Management Board members receive a cash payment as part of a Performance Cash Plan. The remuneration system is based on parameters that are transparent, performance-related and based on the company’s sustainable development. The Performance Cash Plan provides for LTI payments to be capped at 250% of the target value. 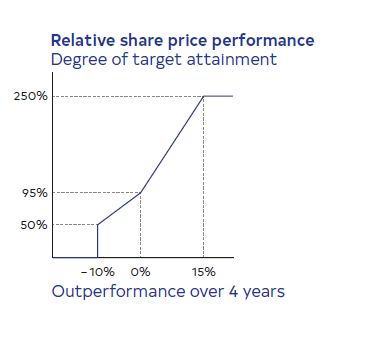 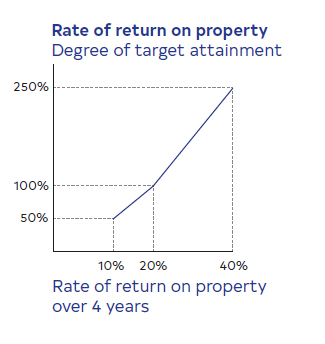 Performance against the two targets is measured at the end of the four-year performance period and published in the remuneration report. The payment of any tranche is capped at 250% of the target originally agreed.

Before financial year 2018 the LTI was structured as a share option programme (“SOP 2014”). In line with the shareholders’ interest in a sustainable increase in enterprise value, the share options can only be exercised if the defined performance targets are achieved at the end of the four-year vesting period, specifically: increase in (i) adjusted NAV per share (weighting: 40%), (ii) FFO I (without disposals) per share (weighting: 40%) and (iii) the share price performance (weighting: 20%). Within each of the targets mentioned there is a minimum target that must be achieved before half the share options attributable to this target can be exercised. There is also a maximum target at which all the share options attributable to this target can be exercised. The minimum is set at a performance of 75% and the maximum at 150% across all individual targets. The performance targets include both the absolute change in the sector-specific indicators EPRA NAV per share (adjusted for goodwill) and FFO I per share on the basis of the company’s four-year planning before share options are issued, as well as the relative performance of the Deutsche Wohnen share compared with a peer group of publicly listed competitors in Germany. The vesting period for a tranche of share options starts on the issue date and ends at the close of the fourth anniversary of the issue date. The options may be exercised over a period of three years. Share options that are not exercised by the end of the total seven-year period are forfeited or expire without substitute or compensation.

In addition, Management Board members Henrik Thomsen and Lars Urbansky receive virtual shares known as “Restricted Share Units” (RSU). The allocation of the RSU’s is made in tranches over four years on April 1 of each financial year. The number of RSU to be allocated in each financial year is defined in advance in the service contracts for Management Board members. The agreed value of each RSU corresponds to the reference price of the Deutsche Wohnen SE share at each allocation date, plus a notional dividend. This corresponds to the amount of the company’s annual gross dividend per share, which is added in the year of allocation and every year thereafter. Allocations end if the qualified Management Board member leaves the company for whatever reason.

The RSU convertible shares may not be sold earlier than four years after the date on which the respective tranche was allocated.

The members of the Management Board have received the following remuneration in return for the performance of their responsibilities in this capacity:

No loans or advance payments were made to members of the Management Board of Deutsche Wohnen SE in financial year 2019.

The following share options have been granted on the basis of the previous share option programme (SOP 2014):

The final number of share options that can be exercised per tranche is determined at the end of the four-year vesting period, depending on performance against the criteria mentioned above. The exercise period is three years and the exercise price is EUR 1.00.

The second tranche (2015) of the SOP 2014 became eligible for exercise in March 2019 after the Supervisory Board had determined the level of performance. Michael Zahn and Lars Wittan each exercised all of their share options in this tranche in financial year 2019 and received shares from Contingent Capital 2014/III.

Total expenses recognised for share-based remuneration in the reporting period were EUR 11,000 for Michael Zahn, EUR 3,000 for Lars Wittan, EUR 1,000 for Philip Grosse, EUR 0 for Henrik Thomsen and EUR 0 for Lars Urbansky.

1.3. Remuneration system for the Supervisory Board

Furthermore, the company has taken out general liability insurance on behalf of the members of the Supervisory Board (so-called D&O insurance), with retention of 10% of the value of the damage in question. The excess is capped at one-and-a-half times the fixed annual remuneration for the respective Supervisory Board member for all losses occurring in a given insurance year.

No loans were granted by the company to members of the Supervisory Board.